I was 11 years old when my mother’s father died, so I remember him through a boy’s eyes. Strong hands that would help with important things like tying a fishing line or patching a grazed knee; a good nature that made him a soft touch for cigarette cards or chewing gum from the Wrigleys machines outside the shops; the small mysteries of the things that my own father never did – smoking Woodbines, a wink before he disappeared for a ‘pint of milk’ at the pub before family supper.

Most exciting to a reader of Victor comics and even then old-fashioned Boys Own Annuals was the knowledge that my grandfather, Leslie Dixon, had been a soldier in the Great War. In the bright dawn of a 1960s childhood this seemed as romantic and intriguing as King Arthur and Thunderbirds combined.

In August 1914, soon after war broke out, the British Expeditionary Force that had been sent to support the French Army was forced – despite its fierce resistance at the Battle of Mons – into a chaotic retreat towards Paris. Across the UK appeals went out for volunteers and just two weeks later in early September Leslie Dixon, a 17-year-old office worker and reserve chorister at St Nicholas Cathedral in Newcastle-upon-Tyne, joined a newly formed battalion of the Northumberland Fusiliers, 1st platoon A Company. The battalion, the 16th, was a ‘pals’ battalion, so named because friends and work mates served together. 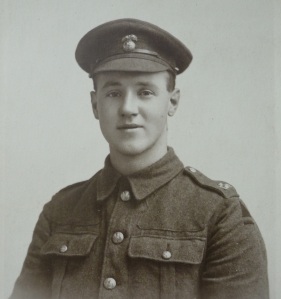 During early training – squad drills on the grammar school playing fields – the recruits, distinguishable as such only by a red cord on their right shoulder, returned home each night. On the 8th December, now in a blue-grey uniform provided by the city store, Bainbridges, they moved into huts on the meadows below Alnwick Castle: more squad drill, ‘tactical schemes’ to evade enfilading machine guns, and at the weekends, dances.  In the New Year their khaki arrived and as 1915 progressed they were moved far south to Salisbury Plain for training under BEF officers.

On 20th November they left for France, entering their trenches at Drancourt (near the French coast between Calais and Dieppe) on December 15th. They stayed there for 4 months, a cycle of 6-8 days in the front line, 4 in support, and 4 in reserve. Leslie had become a keen sprinter in his teens and now became one of battalion commander Colonel Ritson’s runners, taking messages between HQ and the front. The battalion was withdrawn from the front in April 1916, spending the next 2 months behind the lines training for an attack. After the trenches of Drancourt it must have felt like relief indeed, but it was to be cruelly ended. On June 27th they moved back up to the front under heavy shelling, arriving at their trenches near Thiepval on the 30th.

When the British artillery fell silent at 7:30am the next morning, A Company was the first company in the battalion to go over the top in what is now known as the first day of the Somme. To north and south, along a 20,000 yard front 120,000 British soldiers attacked the German trenches.  Nearly half of these were killed or wounded that day, and Leslie’s battalion was no exception – of 21 officers and 661 other ranks that left their trenches only 8 officers and 300 men returned. No ground was gained.

Two weeks later, the survivors were ordered to attack once more. Reinforced by fresh drafts, the battalion ‘gained its objective’, was driven back, counter-attacked, and suffered further losses. In August they moved back to the rear for rest and further training, in October they returned to the front, in November occupying the trenches of the old German front line at Thiepval, with remains of comrades from 1st July still to be identified and buried.

Like many of his generation he rarely spoke of his experiences, and never to me, despite my frequent requests. He did take me up to his attic, where he unpacked a trunk with a khaki jacket, lengths of webbing and buckles, tobacco tins and – best of all – his service revolver with which I charged triumphantly through the house, to the – then inexplicable – horror of my mother and grandmother. And I remember asking once more as he left my 7 year-old bedside that he stay and tell me stories of the War – ‘were there tanks Grandpa, were there tanks?’ and his quiet response ‘no, son, there weren’t any tanks’, and darkness as he switched out the light.

Leslie Dixon served with the 16th Northumberland Fusiliers in France until spring 1918. In April he was sent to the peaceful setting of Keble College Oxford for officer training, something that would never have happened to a working class youngster pre-war. On passing out as a 2nd Lieutenant, he volunteered for the Royal Flying Corps, flying as an observer in a Bristol Fighter until the Armistice in November.

Also flying as an observer on the German side was a young man called August Moser. August flew more than 200 sorties between 1916 and 1917 and was awarded the Iron Cross First and Second Class, an event so unlikely for a young Jewish man that his decoration made the front page of Berlin’s Jewish Weekly. August was my paternal grandfather Ernst Moser’s older brother and his death in 1917 – apparently as a result of engine failure (there were no parachutes) – shook the family. 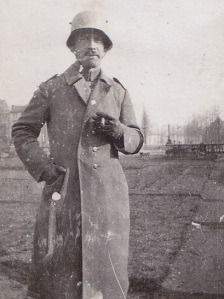 Ernst was born in Berlin in 1885, his father an extraordinary man who had climbed from provincial banker to the Board of both the Berlin Stock Exchange and the Bundesbank (German Reserve Bank). This success meant that Ernst did his military service in his early twenties with the elite Guard Kuirassier cavalry, though his Jewish faith meant that he could not serve as an officer.

The Guard Kuirassier left Berlin on August 3rd 1914. Their first action was against a French Dragoon Squadron – probably one of the last all-cavalry battles on the western front. They advanced through Belgium and fought at Mons, advancing into France before being driven back by resolute French defence. Transferred to Galicia in July 1915 the regiment spent the next 2 years fighting Russian troops in what is now Poland. In 1917 they – in common with most cavalry units – had to give up their horses, and were ordered to return on foot to the Western Front.  Perhaps it was then that this photo was taken of Ernst Moser, now Lieutenant (religion, like class, becoming less of an impediment as war made its demands), posing for the camera in the Belgian town of Tournai.

Unlike August, Ernst survived the war and successfully shielded his family and his business from the chaos of post-war Germany. Of course, nothing could protect them from the Nazis, and in the 1930s they left Berlin, moving to London.

This is another period, and not for this blog post, however it did lead to what was for our immediate family a very happy result. The wedding of my parents in 1955 is shown below. Ernst, the German cavalryman is on the left, Leslie the British Fusilier on the right. 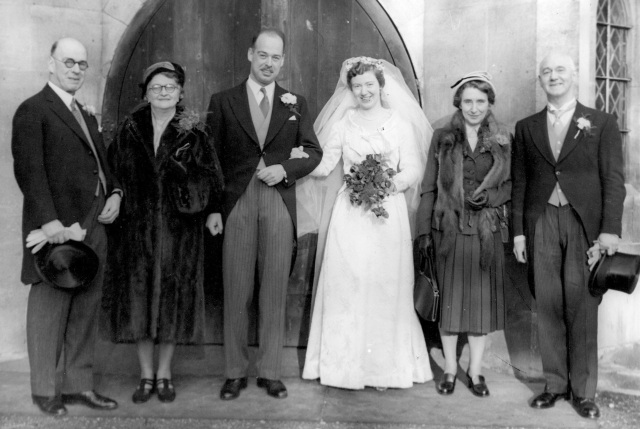 I never met Ernst because he died just a year later, a few months before I was born, which is no doubt why I bear his as my middle name. I understand he was a very kind and decent man. My two grandfathers met on several occasions and apparently they got on very well. It’s much too late now to ask their thoughts on the gulf between the four years of war they’d each endured and the peace of family life in the 1950s. However I am sure that they would have been as one in wanting none of their descendants to have to experience what they did.