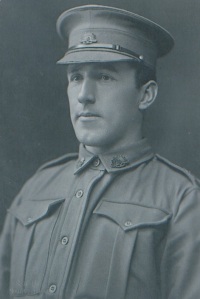 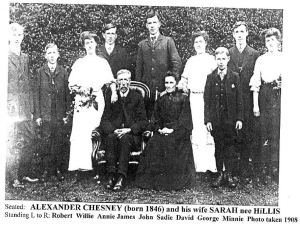 George Chesney was born on 11 March 1889 in Portglenone, County Antrim, Northern Ireland. He was one of nine children (6 sons, 3 daughters) of Alexander and Sarah Chesney—three sons emigrated to Australia and a daughter went to the USA with her husband. This family dispersal was essentially because Alexander’s flax mill could not support/employ all of them. (This mill was operated by the biggest water wheel in Northern Ireland—about 8 metres in diameter.) 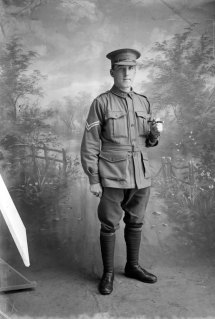 George left school at 14 and served his apprenticeship as a draper in Dundalk, which is now in the Republic of Ireland. He emigrated to Australia with his brother John, arriving in Adelaide on 5 November 1910 (their older brother Robert had emigrated to Adelaide in 1908 and set up a tailoring business in Hindley Street Adelaide). George joined the department store James Marshall & Co (now Myer) in Rundle Street where he became head of young men’s clothing.

George served at Gallipoli and then France. He was wounded in action in both Gallipoli (gunshot to wrist) and France, most seriously (gunshot wounds to head and back) on 4 August 1916 at Pozieres. Although he eventually rejoined his battalion after this serious injury (Dad remembers his Dad as always having a half inch hole in his head from a bullet) he was never really fit again.

After the war, although George returned to James Marshall, he could not settle down and decided to purchase the property ‘Yarra Glen’ with his brother John. This was a 7500 acre wheat/sheep property 12 miles east of Waikerie in South Australia, with a 2 mile frontage on the River Murray. On 15 September 1926 he married Christina Atkinson at Berri, South Australia. Later he became a JP and, after retiring in Adelaide in 1947, was made an elder of the Tusmore Presbyterian Church in Adelaide.